What is Ethical Non Monogamy? 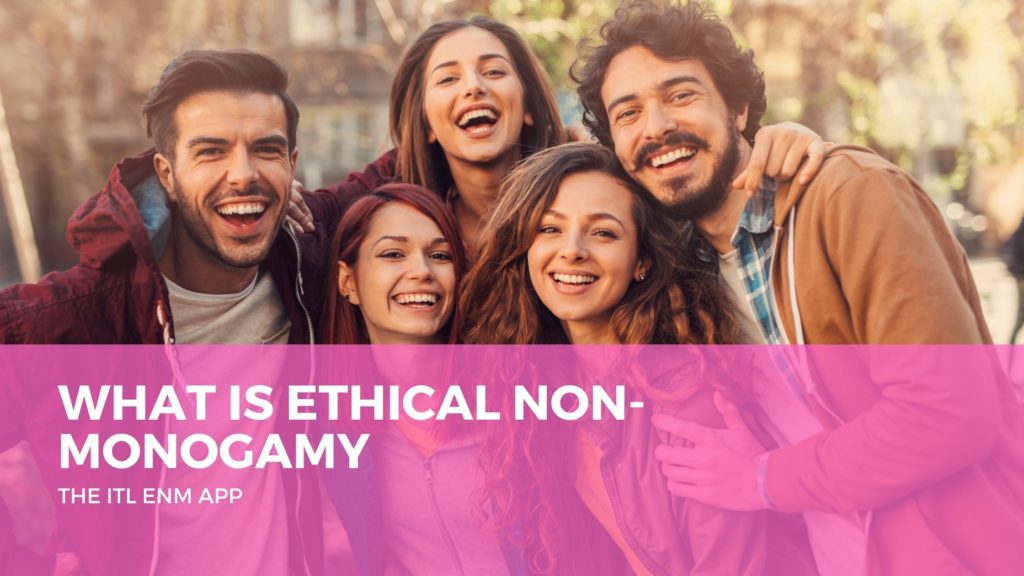 In the late 1960s the concept of Ethical Non monogamy was created. It was similar to other partnerships, such as “friends with benefits” or other variations of a liberated relationship built on trust and communication. There are many variables to consider before you dive into an ENM relationship so do your research and seek out like minded people to help you discover if an Ethical Non Monogamy relationship is right for you.

A Brief Introduction to Ethical Non-Monogamy

Ethical non monogamy is a relationship in which both partners are free to pursue sexual or romantic relationships with other individuals. Couples, singles and larger circles in ethical non-monogamy give further permission to engage in personal connections with other people. Therefore, this relationship’s most prominent distinguishing characteristic is that all sides are willing to be in it and openly communicate their wants, needs and desires with all parties involved.

The Basics of Ethical Non Monogamy

You and your partner(s) reach a consensus over what you desire and do not want.

In terms of non-monogamy ethics, there are no hard and fast rules. Instead, the persons engaged in a relationship will create agreements about the partnership dynamic.

Rules naturally indicate that one person may create one, and the other follows, and that is not what two (or more) individuals in a true ethical non-monogamous relationship does. Agreements suggest that both (or all) persons agree to something, making it an ethical and collaborative choice.

Partners may determine whether they want their relationship to be committed, casual, long-term, short-term, romantic, sexual, or any mix. They mutually agree on what sorts of relationships they’ll explore and not pursue, both with each other and with others. They can establish whatever limitations or expectations they’d want to make all parties feel comfortable.

Everyone has their own commitments in this relationship and these are meant to be respected by all people involved.

You have to be honest with your partner(s) and vice versa.

The foundation of ethical non-monogamy is openness and truthfulness. Being explicit about your boundaries, restrictions, and expectations is vital when striving to create a healthy and lasting relationship. People in morally non-monogamous relationships must get comfortable with communicating honestly about their emotions, wants, and desires and being responsive to other people’s.

This form of relationship needs both active listening and empathy. Taking the time to think about and convey your prejudices, anxieties, and worries about ENM before you shift into this sort of interaction is crucial.

You and your partner(s) have respect for each other’s feelings.

A non-monogamous relationship does not imply you care less about your partner’s emotions. Ethical non-monogamy requires a great deal of attention and compassion.

Many of the same fundamental ethical principles that apply to monogamy are also used in non-monogamy: no lying to each other, no coercing one other into doing things they don’t want, and no deceiving each other. It is discouraged to make choices that could directly or indirectly affect your partner(s) without first contacting them or obtaining their approval.

Some polyamorous individuals opt to have a main partner. This sort of non-monogamy is referred to as a hierarchical relationship. Hierarchical dynamics are characterised by partners prioritising time, commitment, space, etc., with certain partners above others. For instance, a person may prioritise their partner above their lover; in this situation, the spouse is the main partner, and the lover is the secondary partner.

What about nonhierarchical partnerships?

When it comes to ethical non-monogamy, some individuals don’t have the need or want to be monogamous. As a result, each partner may be seen as equally significant in various ways. Relationships in non-hierarchical dynamics are not always characterised according to significance or priority.

A person may have multiple love affairs, but none constitutes a serious long-term relationship. It is also possible for a person to have two equally loving relationships. Some individuals may have a social circle where everyone is seeing someone else. For example, three or four persons can be in a love connection in a triad or a quadruple, and this is a normal occurrence as long as all involved are aware it is going on.

Regardless of if you are in a monogamous or non monogamy relationship, you can expect to experience problems, conflict, pleasure, sadness, and every other feeling. As a result, you must show respect to your partners whether things are going well or not – be a good human.

Many positive and negative emotions are common in an ethically non-monogamous relationship, including jealousy, insecurities and worries, highly elevated libido, an enhanced connection with one’s primary partner, a sense of freedom and self-determination, and an enormous amount of kindness.

Those who come into an ENM partnership believe they would be free of jealousy, which is an easy assumption to make but it is not true unfortunately. Everybody, regardless of the type of relationship they have, gets jealous from time to time. You’ll need to be open and honest with everyone to get over this and the more open you can be the quicker you can resolve the feelings.

People in ethical non-monogamous relationships may feel jealousy less often or less strongly, or they may have superior coping mechanisms when it arises. This is likely due to better communication and a heightened level of empathy for those in the relationship.

Self-reflection and unlearning are two of the most important activities you can have. Our instincts and urges take time to catch up to our conscious decision since our brains are wired for monogamy from birth (thanks mainstream controlled media!). Entering the attitude of ENM requires a significant shift in perspective but we feel it is well worth the effort.

Are there types of Ethical Non Monogamy?

There are many types of ethical non-monogamy and each type could be a piece of what is best for you.

How does Ethical non-monogamy differ from polyamory?

Polyamory is a non-monogamy that falls under the umbrella term “ethical non-monogamy.” Ethical non monogamy includes swinging, casual sex, consensual non-monogamy, open partnerships, and polyamory, but there are many additional types.

People who are ethically non-monogamous but do not engage in polyamory do not engage in several romantic relationships at the same time. It’s very uncommon for two individuals to have sex with other couples (known as “swinging”), but they never date anyone else. Polyamory may or may not be an option in this situation of ethical non monogamy.

How does Ethical non monogamy differ from open relationships?

What are the benefits of ethical non monogamy?

Trust & Freedom: As per medical research, ethical non monogamy relations had a much lower ratio of jealousy but higher trust in their partners. In ENM, you and your partner give you the freedom to have relations with other partners because they trust you.

When you trust someone, you give them your space and freedom. The more you trust someone, the more free time you can give them. Because if you allow or create relationships outside of friendship, you do not have to feel jealous of them as much. In a non-monogamous relationship, your partner does not act as a detective or try to control your activities and spy on you.

Better Communication: Better understanding is among the top advantages of having an ethical non-monogamous relationship. People in an ENM relationship often highlight it as the best part of the relationship.

If you have an ethical monogamous relationship, you can talk about everything, make agreements, and set boundaries, rules, and preferences. You can have general communication and talk about difficult topics with your partner and create a deep level of trust.

Interesting Love Life: Your love life gets more interesting when you have an ethical non-monogamous relationship because just one partner is not expected to fulfil your sexual needs and demands. Hence, you get to choose more options and find new possibilities for them. Moreover, it is good and healthy for us to explore our sexuality. That’s why ethical non-monogamy gives you the chance to experience new things and explore your passions, desires, and sexual orientation. Many people who are or have been in an ethical non-monogamous relationship confirm that you can have a great and flourishing love life in ENM.

Personal Growth: Ethical Non-Monogamy also helps you to grow as a person. Because you can have multiple partners, build greater levels of trust, have deep conversations, and explore your sexual orientation without the fear of judgment or any restrictions. You also get the benefit of shared experiences with multiple people so you learn from each unique relationship.

You explore and learn more about yourself and grow more as a person. Non-monogamy isn’t only about sex; it’s about more than that. You can have many relationships of different types. Some might be exclusively sexual, while others aren’t.

Where can I find ENM Partners? The ITL ENM Dating App is a purpose-built app for all sorts of relationships and plays dynamics, so you don’t have to worry about making standard applications work for you.

Our ENM app allows you to have multiple relationships to satisfy your needs and grow personally. It also has a beneficial effect on people’s lives and sexualities. In addition to specifying your sexual orientation and marital status, you may also specify your preferred kind of romantic relationship in order to connect with other people searching for a similar kind of connection. 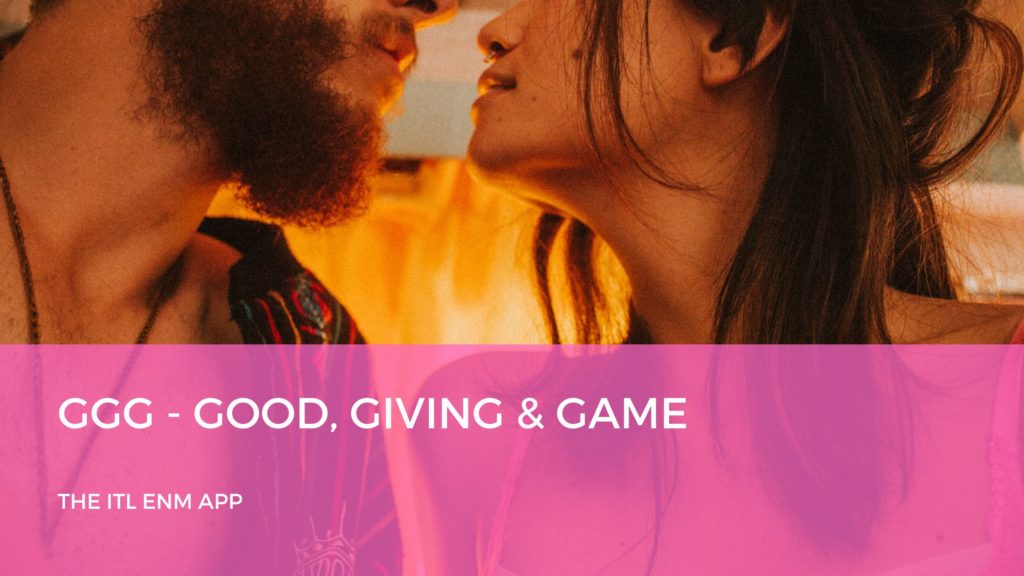 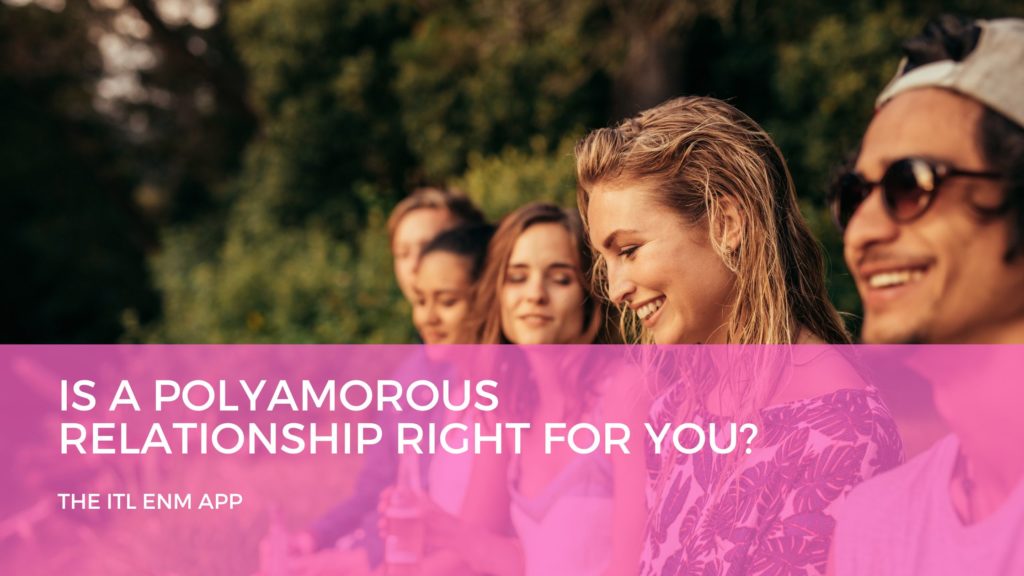 Is a polyamorous relationship right for you? 19 Do’s, Don’ts, and Other Things You Should Know 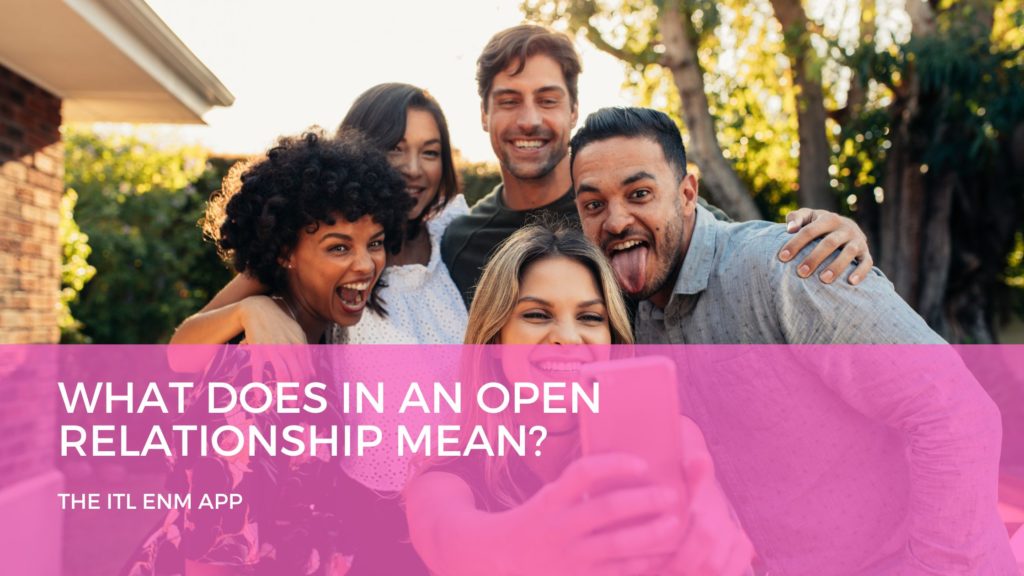 What Does In An Open Relationship Mean?